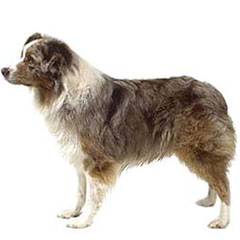 Australian Shepherds were named through a misconception of their origin – an ancestor may have trekked through the land down under along the way, but the breed actually evolved on farms and ranches in the United States. An instant hit for their intelligence, quick action and herding abilities, as well as their watchfulness around the home, Aussies grew in popularity in the land of their namesake and around the world.

Bred to think on their own, Aussies are not robot dogs. Instead their problem-solving ability might lead to the owner's entertainment or frustration. They're liable to be under the sink helping you find a leak – and they just might beat you to the solution! Their strong-minded ways can cause a conflict of interest, however, so wise owners will convince their pups that doing things in a way that fits with the owner's desires and needs is the best for everyone. People in their own household are the Aussie's favorites but they reserve comment on strangers until properly introduced. Put to the test, this breed will be protective. Although Aussies are accepting of other animals, they prefer to be the pack leaders. An Aussie's focus, high energy, and capacity for learning can lead to all sorts of possibilities for avocation or vocation. This breed can be seen herding, tracking, competing in flyball, playing Frisbee — or working as an assistance dog or with a Search and Rescue team.

Although the hair on the head is short, the body coat is thick and dense and may be either straight or wavy. The range of colors is as varied as the breed's abilities: red, black, blue merle or red merle, with or without white and/or tan markings. Aussies may have multi-colored eyes as well – brown, blue or a mixture of both, a trait which led them to be called “ghost-eyed dogs” in days gone by. Aussies have docked tails in the U.S.

Begin good basic skills at home – these pups are star pupils! If possible, attend a puppy kindergarten to socialize with other pups and owners. Obedience training helps the canine member of the partnership to learn who's the boss. Look for a class that encourages positive training methods.

Frequent brushing (at least once weekly) is necessary to keep both dog and household neat. Heavy shedding occurs about twice a year. At that time, a bath followed by vigorous brushing helps remove the dead hair.

Prospective buyers should ask whether parents have been tested for eye and hip disease. Avoid a double-merle breeding which can produce deaf and/or blind pups. Look for epilepsy-free lines.